Drawing from memory is a big deal. It needs practice and practice.

The point of this study is not drawing beautiful or effective. It will be a study for building a visual memory for animals. You will be drawing some animal poses in a minute or two and check your memory. It is surprising to find out that you have almost no image of the animal you are drawing. Many artists practice it pretty many times to build it; if you are just okay with your visual library already, you are damn so lucky then 😀

In the previous posts, I told about animal anatomy, parts separately, poses and in motion(and more) -they are all connected to and complete each other. So I repeat it again that basic anatomy knowledge makes you know what you’re drawing and makes things a lot easier. It is wise to check the animal’s skeleton before starting drawing. You can go to previous posts to fill in the gaps if you need it.

So what will we do today?
You will draw an animal from imagination; find a reference photo in that pose to see your mistakes and general feature of the animal; then sketch the same thing and check the animal again to find missing points in your drawing and refresh your memory; then draw the same thing and compare it to your reference photo –and so on. In every step, you are going to see the progress. Spare short time for each pose and start from easier ones, then to complex. I have an example of it down here. Also, this approach can be used in anything you try to learn, I used to do that at school.

P.S.: You can enlarge images on the new tab.
P.S.: The sketch on the up is from memory, the down is from references. 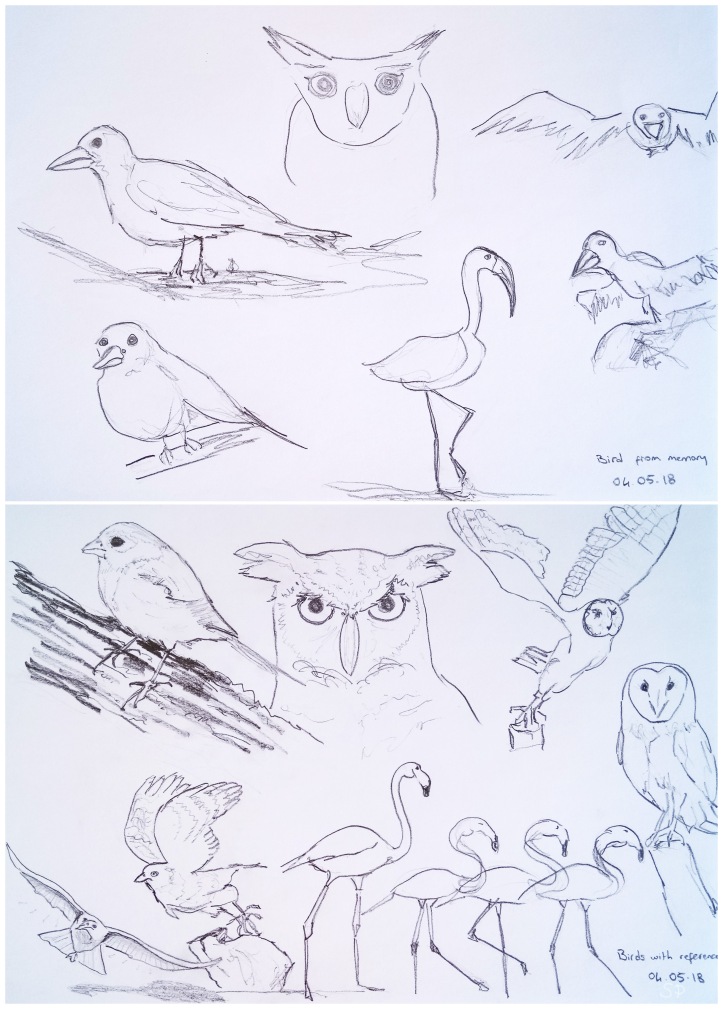 The first one is drawing birds from memory. The second one is drawing from references where with very similar angles and poses. I compared these two, memory&reference and noticed:
-I drew 3 toes, but they are 4 as I checked and saw.
-While drawing a walking flamingo I imagined its legs bend like any other animals/humans, but it bends to reverse side -a surprise to me, I have learned while sketching for this study. You can see them three are walking and also the ‘S’ curve of their neck. Pay more attention to its ankle(knee is right next to its body, what follows is the ankle -in the middle-), this part reminds me of an architectural structure detail.
-Flamingo’s beak is way smaller than mine. Compare the beak’s size to the whole and see how small it is. It must have been a flash/vivid view of it in my memory when I think of a flamingo, then I drew bigger I think. My memory drawing is more like stork than a flamingo.
-There is an owl from my memory, and the one is drawn from a reference, another owl taking off, and its face from front, symmetric. Pretty much a characteristic face I think.

A giraffe, cat reaching up, horse on hind legs, pig, chimpanzee and dog.
Comparison:
-Obviously, the biggest point I didn’t know for the giraffe was the neck, which doesn’t go all the way straight up from its body. It has a bump of its spine over its scapula and the spine has that slight ‘S’ shape in the neck.
-There was nothing of a chimpanzee in my memory before the study.

Here is just one pose for each animal, but you can do this exercise with various poses for one animal, from simple to complex. 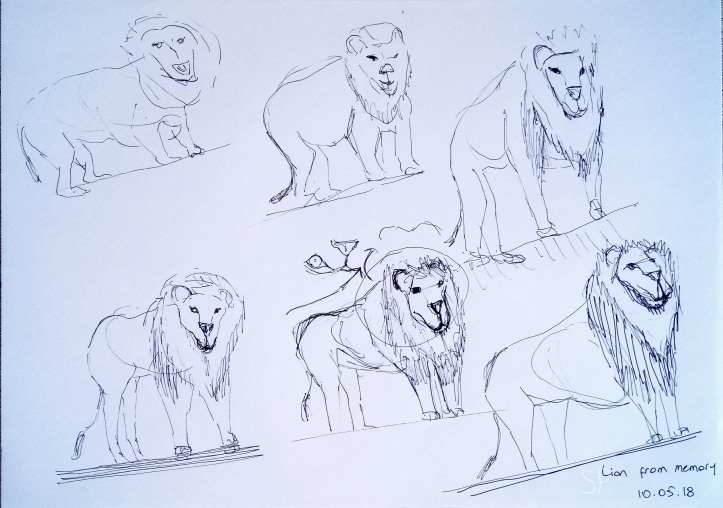 Six steps of a lion from memory. How it works is the same, draw from your memory and find an image of the animal from the same pose to compare. Then draw it without looking at the reference. You will be drawing in short time again to draw its general feature/pose with fewer lines and there will be no time for details.
See the first lion(?) in the sketch above?
-Correct the pose&perspective&foreshortening&skull form etc. Check its proportions, head’s size to the body, length of the leg etc…
Repeat the process as long as you want.

During this study try not to use an eraser. To avoid that I used a black pen. 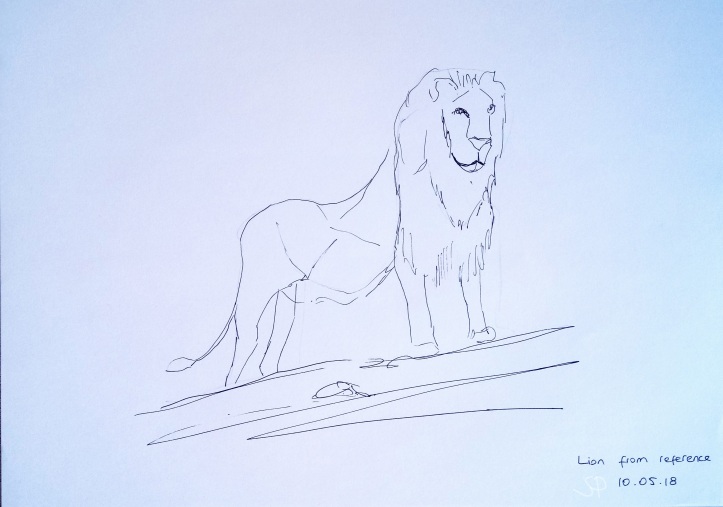 After studying the anatomy of the animal, sketching from memory and building some visual library, drawing from reference is a lot easier. So after these six steps of lion from memory, I skipped to the reference, a minute drawing again, I see the foreshortened body is still long. Kept going on. 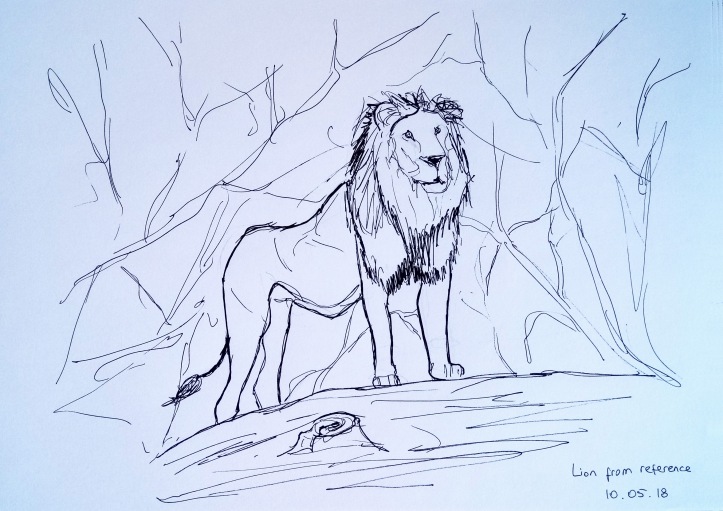 From reference, with some forest background this time.

Drawing from life is a real and good teacher, too. But it might be challenging when it comes to animals for they are in motion. You can do the study with photos at first then maybe skip to your pet, or animals from shelters etc.; observe them and draw, and build your visual library of animals.

This kind of studies and anatomy should be studied over and over from time to time. You will feel that you should refresh your knowledge. I’d be glad to hear your experiences, too; what you chose to draw and how it went? Drop a comment!