Let’s take a look at animal eyes this week and examine how to draw them. Travis–My Eyes playing in the background(don’t skip the video clip :p), did you prepare your papers and pencils?
Good! ^^

Many facts I mentioned in the human eye drawing tutorial are the main facts for animals as well; shape of the eye, iris’ pattern, pupil at the centre of the iris, highlights at the iris, eyelids, eyelashes, thickness of the skin, positions of the eyes on the head according to head’s position etc.
I will explain those things with some sketches.

First of it is the perception of the eye, which is not flat, but a sphere. So because of that nonflat surface, you can imagine where can be the highlights(iris/around iris) or shadows(at the edges). So the goal here is to be able to give the round effect of the eye, then your drawing will be a lot more realistic.

Another thing in the sketch above is that the circle/oval shape.
For drawing human eye, the iris(and pupil) is right at the centre and circle when we look at it from the front, as you move the camera that circle starts turning into an oval -it is the same for the animal eyes, too.

So while drawing an eye, I personally prefer to position the eyes in the head at first with almost invisible lines(better use a hard pencil for that); then draw the iris circle/oval; then draw the outer shape and cover the iris partly.

That simple sketch is about the different shapes of animals’ pupils. Some have diagonal pupils, some have thin vertical line pupils, round pupils like humans and the third one above-horizontally elongated pupils– may belong to a horse, sheep, deer or goat etc.
Pupils change sizes according to light and dark. While that ability is weak for a human, is strong for some animals which are active day and night, then they have a better vision with a low light, too.
Vertical pupils are most likely seen in predator animals and horizontal pupils in grazing ones.
You can google geckos for another different shape of pupil.
I am dropping an interesting article about the pupil shapes in the end, if you’d like to read more about it. 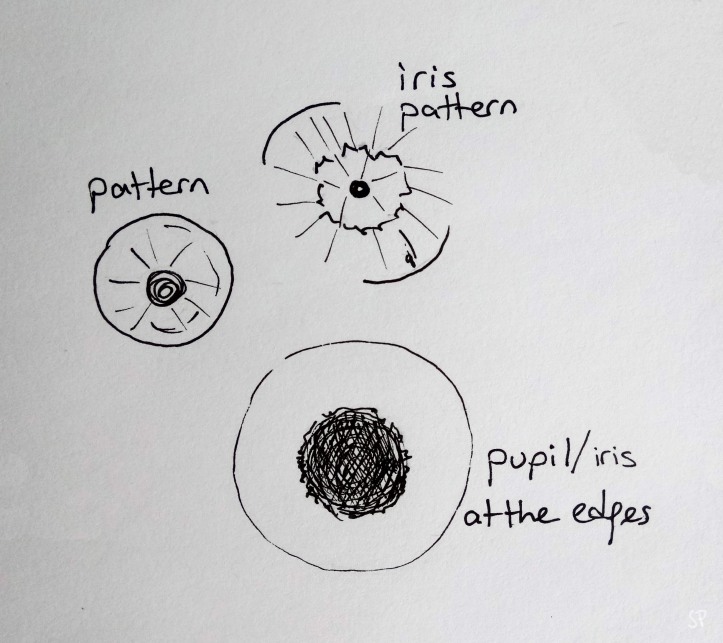 Working on the iris pattern is another important step for the reality of your drawing. It was actually very surprising to me to see that an iris consists of tones of a color and/or many different colors when I had a macro look the first time. So basically the pattern is something like in the sketch above.

Another thing is that, when you will be working on a bigger scale of drawing, where you can put more details, you can also try to give the effect that iris at the edges of the centre around pupil has some curves inwards and the black pupil is not a perfect circle/oval; you can google ‘macro animal iris‘ and see what I mean. 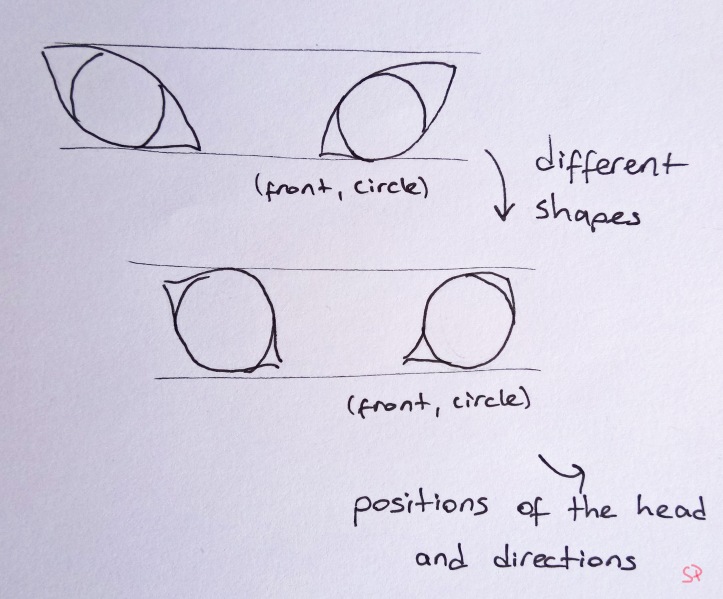 Different shapes. The third arrow shows the next image 😀

A happy cat in here. The (imaginary) curvy line in the middle of the face is closer to the further eye. So the position of the head is another challenge.

A horse and lion, with eyelids and small steps. 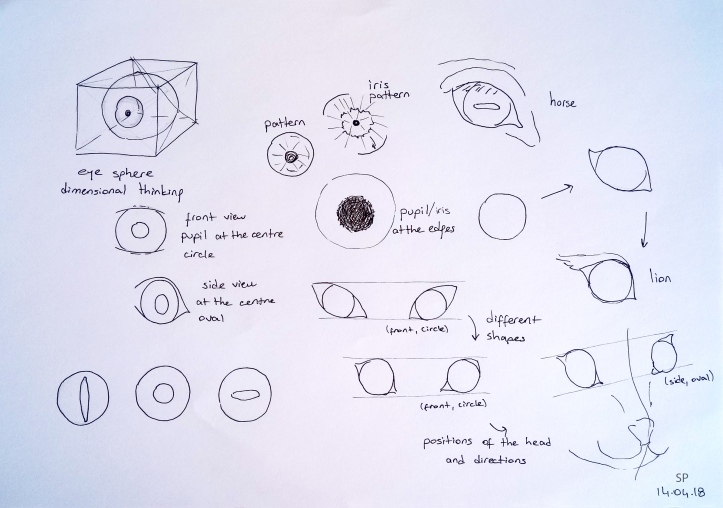 Here I have a drawing of four eyes: a flamingo, reptile, tarsier and a husky dog; the tarsier has the largest eyes of any mammal relative to body size and weighs more than their brain, the internet says.
Pay attention to the iris color and pattern, eyeball, highlights and shadows.
In the highlighted areas(where you can preserve them in the very beginning of the drawing whether you use colored or sketching pencils(I used white gel pen)) it is possible to see eyelashes’ shadow -that’s a cool trick to apply.

The other topic is iris’ color. The color of iris is about the amount of melanin/pigment, where when they increase the color is brown; they decrease then the color is hazel, blue and/or green. Besides that, animals have orange and yellow, too.
Red-eyed tree frog is an exception with its red eyes.

There are some other facts that you can keep them on mind, I’ll mention to monocular and binocular visions, where you can apply to that information while creating an animal character or e.g.
There is a fact called monocular vision which means both eyes are at the sides of the head and are used separately; the vision is wider and depth perception is lower. Some animals like horses, zebras have their eyes at the sides, then they are almost able to see their backs, and have a blind spot above the nose.
Binocular vision is the opposite of monocular.

There are many similarities between animal and human eyes while drawing, or at least you will see guidelines better while examining your reference photo. You can find some more information in head positions and eye drawing tutorials for human, I drop links in the end.

There are many interesting facts about eyes, I don’t copy them in here under the tutorial title, but the topic is promising many facts which can make you ‘Woa!‘ like four-eyed fish, animals with three eyelids, pidgeons having a better color vision than most animals, owls not being able to turn their eyeballs and turning their heads almost 360 degrees instead etc.

So that is all for this week, hope it was helpful. You can tell me what you chose to draw, and show it maybe?
Keep in touch!