We have done some animal anatomy and its comparison to humans. Today let’s have a look at beaks and tails.

The truth is I didn’t know what kind of a way to follow and start with which animal, to me drawing an animal is all about making sense of the illusion (proportions, fur, motion, emotion etc.) and I see that knowing anatomy is always helpful, so, I want to follow a different way of drawing an animal, where I want to break things apart. I think that will be interesting.

I tried to break apart a whole animal body into pieces, such as beak, tail, claws, eyes, noses, teeth etc to examine. I wonder If I ever find myself applying to that knowledge in order to design strange combinations in a concept art project, character design or scenario or something and have some fantastic creatures –I hope so!

So here we have different kinds of beaks. Beaks are external anatomical structures of birds, adapted to different forms according to feeding method(generalist beaks, insect catching, grain/fruit/coniferous-seed eating, nectar/filter feeding, pursuit/aerial fishing, raptorial, scavenging, probing, scything, chiseling, dip netting, surface skimming) different sizes, shapes, colors and textures, Wikipedia says. A beak is used for eating, feeding the young, killing the prey, fighting, courting, probing for food and preening. Most species have holes called nares which are related to respiratory system.
The colors of beaks are mostly grey’s tones, yellow, orange and red as you see in the drawing, too.
Some birds can communicate by clapping their beaks -like owls. 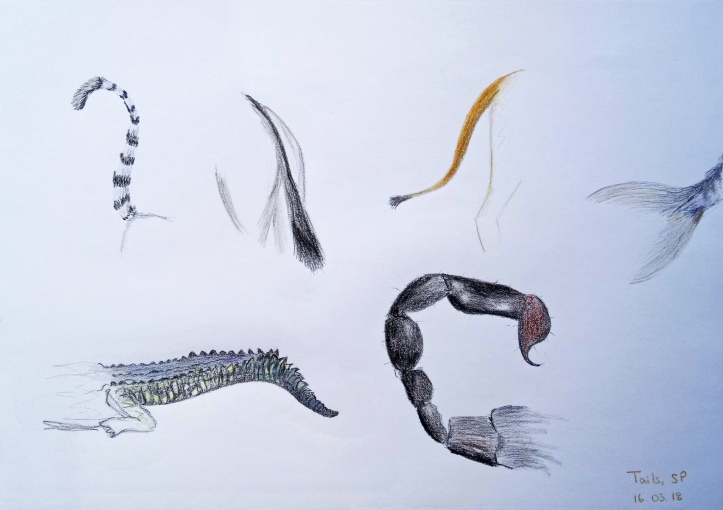 And some tails; lemur, crocodile, donkey, lion, fish and scorpion(with venom in its tail). Interesting fact about the usage of tails is locomotion for fish, sweep away from insects and flies for some other (land)animals, balance for cats and kangaroos, grasping tree branches (prehensile tails) for some monkeys and opossums. Before the researchers of this post, I only knew tail’s balance function, detaching and growing back of a lizard tail and indicating emotions of some animals(such as ‘what is your cat’s tail telling you?‘- familiar with these kinds of articles, aren’t you?). Now here is coming another interesting function about it; which is social signaling between deer species in case of danger. A tail is the long feathers at the rear for birds which is for ruddering. For some animals like peafowl and lyrebird, tail courtships.
And about the comparison of animals to human is quite interesting, too. A human embryo has a tail(1/6 ratio) and as the embryo develops into a fetus, the tail is absorbed by the body growth. So the human has a tailbone attached to the pelvis, called coccyx.

So here we have beaks and tails. I had help mostly from Wikipedia. If you’re interested in more, there is full of more information and I assure you it is so much interesting. For the next post, I am planning to examine nose and claws. Drop a comment if you have any suggestion or anything you want to add.
Happy sketches! Keep in touch!