Last week it was torso’s skeleton and muscles here; you can take a look at my previous tutorial and there you are going to find fundamental informations for this post.

For short remembrance of anatomy (of those I mention here):
-There is spine connects three major masses –skull, rib cage and pelvis.
-Ribs go from front to back-up with an angle.
-On sternum (chestbone) there are 10 ribs on both sides (numbers matter).
-On our backs there are 17 discs of the spine (except neck) and those discs sligtly appear on our backs.
–Trapezius muscle behind neck coming around has a realiton with deltoid muscle, scapula and collarbone. When arms raised they move together with push and squeezing -there is an example below: 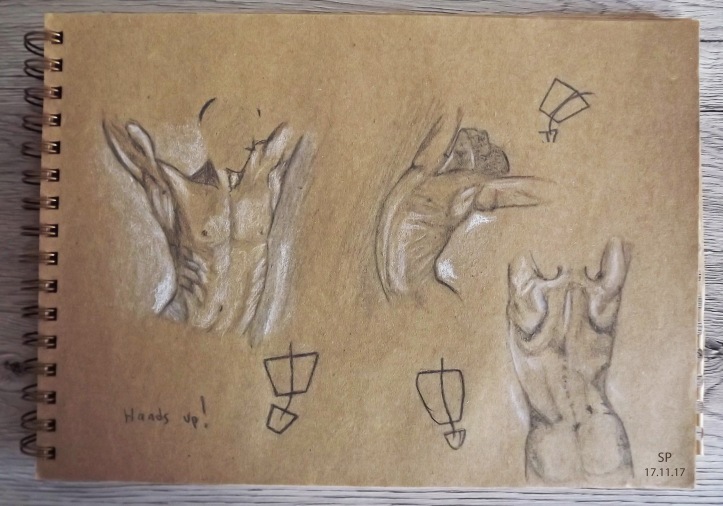 In the first figure the centre line we see in the chest follows the curve of the body. The relation between trapezius(bump) and (pushes)deltoid muscles is clear you can follow.
The second figure leans back. Trapezius and deltoid create a bump together again. Also you can see the back part is squeezed and chest expands by the pose. The chest line is seen still, shiftes from the middle to the back side of the body.
The third figure is a bit tilted. You can see how scapula moves as the arms does. Some of the 17 discs of  the spine (10 of the ribs coming from front, 2 of the ribs are on the back and don’t connect to rib cage/front, 5 of them under rib cage to the pelvis) appears on the back as little dumps.

While drawing a torso figure, you should consider if the pose is stretched, pulled, tilted, bent, leaned, twisted etc.; and a plus, gravity:

A tip from the sketch above: fat areas sag with the force of gravity. The more fat the body gets, you add more curves around belly or buttocks mostly. Aging is a fact, too. 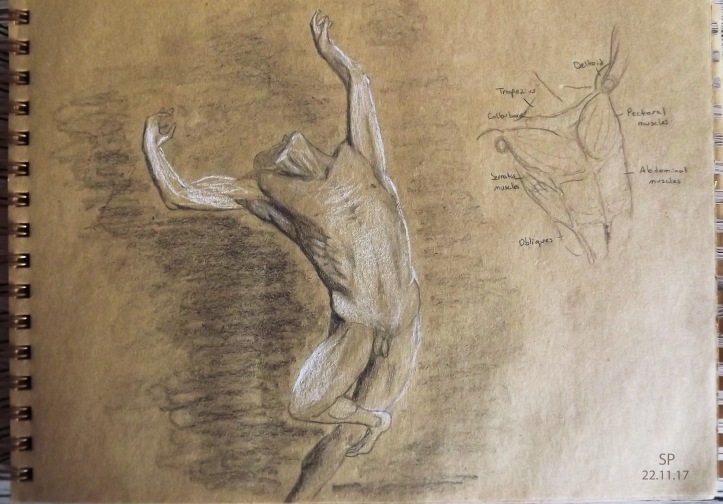 Here is an artistic figure and a sketching of his muscles simply on the right side. Figure is seen with an angle, that makes us see his oblique and serratus muscles on one side.

One more figure, leaned forward with 2/3 view again. We are able to see obdominal muscles here, and count some bones.

As you see this tutorial includes figure’s torsos only; a tutorial with the whole figure in  various poses is going to be published next weeks.

You can go through internet and also some magazines with photos of models -they have some weird poses- maybe you will find some nice references for this study.

Slowly moving to hands and arms. Prepare yourself for the next week!
Happy drawings!