Before starting drawing a realistic hair example there some important facts I want to mention. 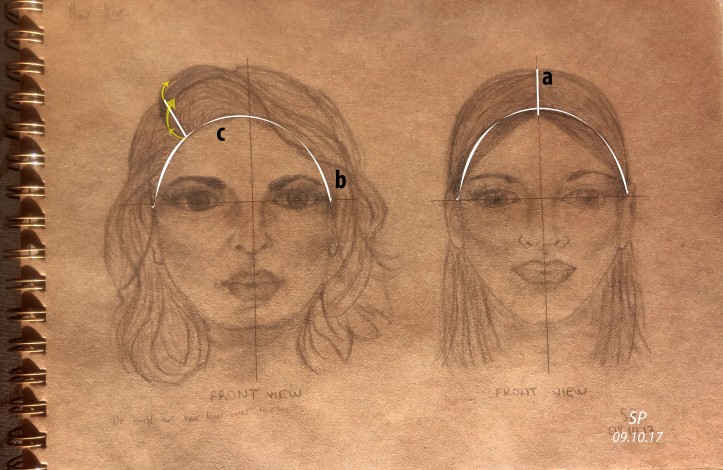 a) Parting, mind the yellow arrows, two of them on the front line
b) Hairline, mind how the way hair falls over face and sometimes covers ears partly/all.
c) Shadow, in curly/wavy hair, though not much seen in the drawing
d) Direction, more information below
e) Volume, straight hair (too) has less, wavy and curly have more volume. 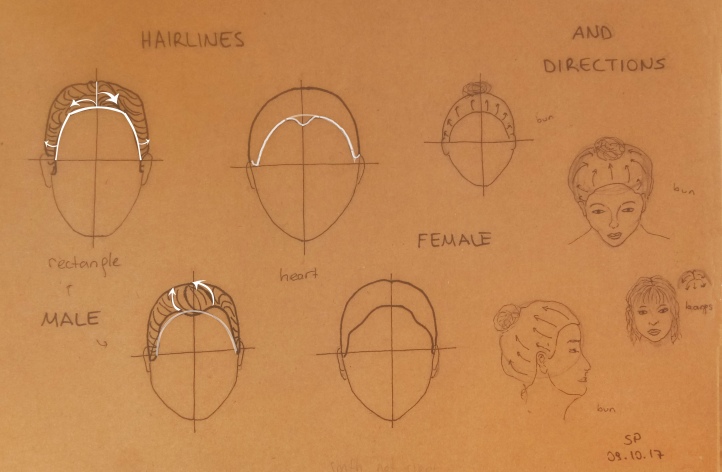 One of them is hairline which is different from person to person. I tried to divide it as male and female you can see it below.

For male there is that rectangle one on the left up side, and the other one on the left down with two arches on the sides of forehead, some males have it steep (like balder), some have those arches slight, as much as I can define.
For female there is heart shape you can see on the right up side. And there is this type I can’t really tell a name for the shape, hairline is just not like the hairline guideline, not on a perfect bending line.

Other important fact is direction. I made some sketches for female (on the previous image you can see two direction examples for male). The first one is a face from front, with a bun. We draw each line towards the bun.
The second drawing is the same situation, head tilted down this time.
The little one is with bangs.

Another fact is volume. You add hair on skull; you should draw each tuft with volume a little or a lot. Straight hair has the lowest volume(from skin to the end not all the way straight), vawy/curly has bigger, how big you decide. Also some people have it like grass man’s grass, if it gives an idea for you, but don’t skip gravity.

Some time ago I had shared my very firsts faces from November 2014, let’s remember those beauties 😀

After drawing those faces I added them hair, too:

When I look at it today I can see mistakes, low quality lines, some tuft of hair looks like glued to the head (especially on the last one) and some other things. So what’s point I share drawings like that: keep all of your drawings to see your progress ^^

And what about today? What progress I made?

After those main facts time for how to draw realistic hair. 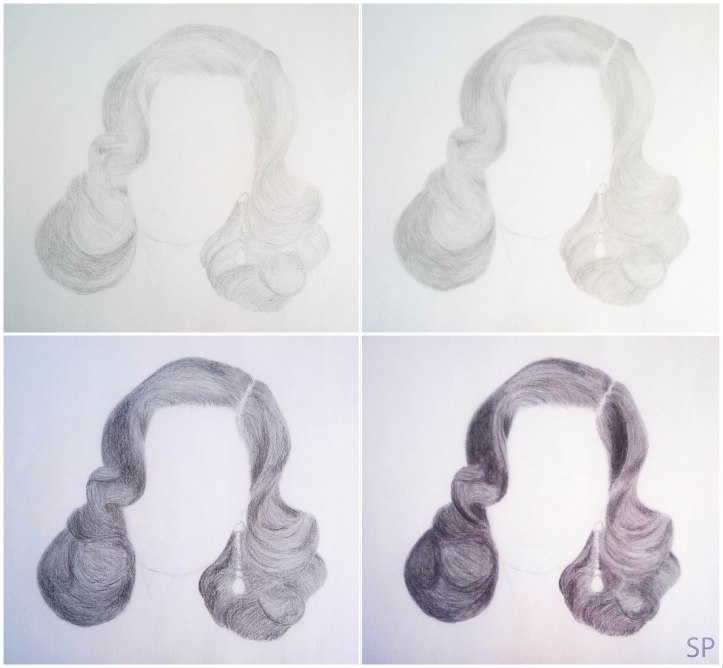 Start with setting general look. I used 2H for that,with light strokes I drew contours of curls and checked proportions by comparing their sizes between each other. Unnfortunately I skepped that step because it was too slight on paper and wasn’t seen on the photo any line, so the main point is starting with a hard pencil to drw general feature.
In the first frame above (you can save the image and zoom) I drew strands according to those curls’ directions. Pay attention to parting side, hair grows to up and bends.
In the second step I used a blending stump for the whole hair to smooth the tones. It made me have smooth background with tones of grey and have still the illusion that there are strands and tufts.
After 2H, I skipped to 2B (3rd frame) and kept drawing more strands over the smooth areas, minding where I want to have lighter, where darker in the end. The hair in my reference photo is fully black and there are strong white light shines at some places.
The next step is smoothing areas with blending stump (if you don’t have you can use cotton as well) and drawing more strands with a softer pencil as much as you want. I kept repeating this process with 4B and finaly 6B, too.

Actually the point about repeating these steps over and over again is that because at the point we think that the drawing is already finished and it doesn’t look that good, that it is not finished actually and needs more time to work on it. Realistic drawings take real long time and good observations. That is why so often I find myself in doubt if I already finished and ask “done yeet?”

So in here with kneaed eraser I added some lights, made halftones and finished. Of course I wasn’t sure if it is finished, but at a point I had to let it go. Later that I saw myself drawing hair in my dream for the next two nights.

So what is it that you’re drawing?
Hope to see you next week. Happy sketching!