After eye and eyebrow posts here we go with nose; prepare your pencils!

Of course I have some old nose drawings, first I’d like to show.

If you compare them between each other you can easily say that drawing nose with lines is surely not an effective way, if you want a good result. Because in nature there are no contours. 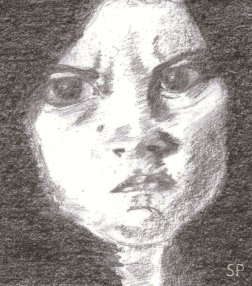 Here is another old drawing from 2016.09, a drawing of Jaimie Alexander’s character from Blindspot, from a furious moment. There is progress from the very first ones to that nose, especially about nonexistent contours in nature, I created nose illusion only with shading (and I had loved this drawing that time).
So I can say that drawing nose is all about shading; a very good one.

Now let’s draw a nose from front step by step.

Mainly a nose has 3 parts; bridge, tip(ball) and nostrils; saying again no contours, no corners. 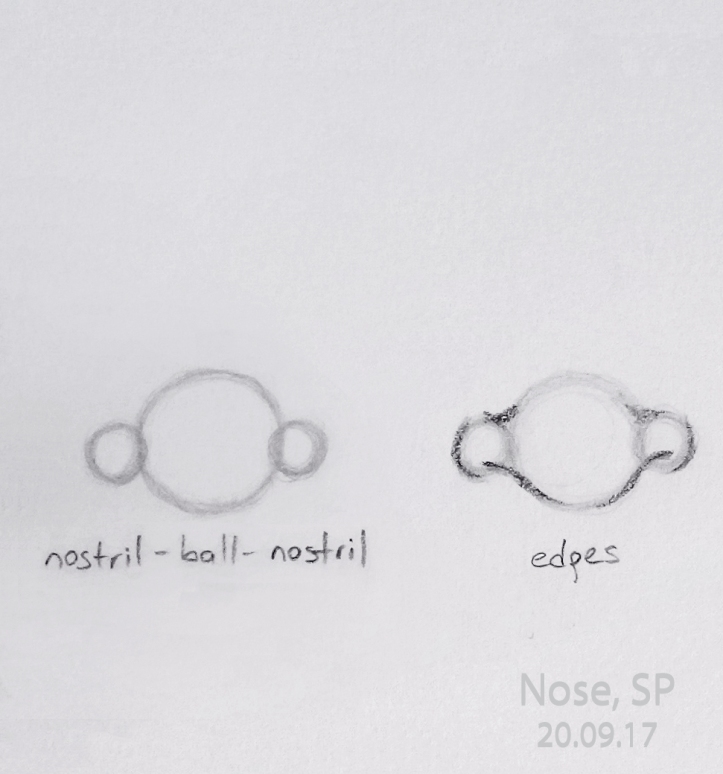 The first step is drawing the nostrils and ball. There are different nose shapes so I pick one of them; 2 small, slightly drawn 3 circles total like above. Those circles are going to be guidelines, so make them light, they will be deleted later.

Light falls in different angles and creates highlights, where it falls less is darker, where no light falls is totally dark. This is how edges appear (as you see above in the second step). And about shading, I can’t really tell where to hightlight or make shadows exactly, because it changes according to the light source and of course the shape of the nose. 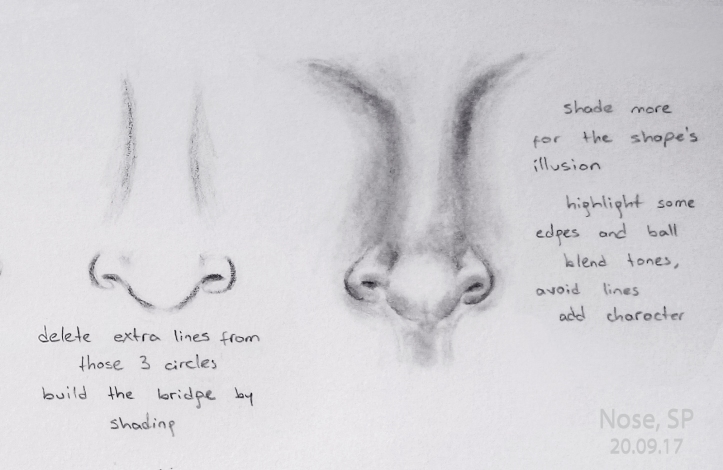 In the third step give the shape to the nostrils and make them ovals or oval-like shapes. A common mistake is drawing nostrils totally dark and circles. In this example of drawing we look at the nose from front and we see the nostrils with an angle. And also they might not be totally dark.
Another thing in this step is the bridge of the nose. There is a curvy way; avoid a single line and shade the bridge.

In the last step during shading you can use different pencil cores(like HB, 2B, 6B together), or cotton swab or blending tortillon. In those studies I used blending tortillon (on the cartoon drawing below) and different pencil cores. Some people prefer using their fingers, but I don’t really suggest that because our fingers are oily; to avoid smudging there are special gloves for drawers because of that oil on our skins.

In the very last moment you can add highlights to your ball of the nose partly with a kneaded eraser -which is super easy to give a thin shape to the eraser to delete, or if you use a vinyl eraser you can cut it to have that thin surface. Around the nostrils, up or down parts of nostrils you may have some light areas; and darks as well, so you can delete those places with the tiny edge of your eraser for the tiny lighter areas. The thiner you make that highlihted area, the more looks more realistic. So you should pay extra attention while doing that.

Those 4 steps together in one image.

So above we can see different nose shapes from front in different variations of circles to ovals, oval-like or circle-like shapes. Remember that we started that nose steps with 3 circles; 1 big, 2 small. So above we see how we can change the shape of nose when we play with the shape of circles. 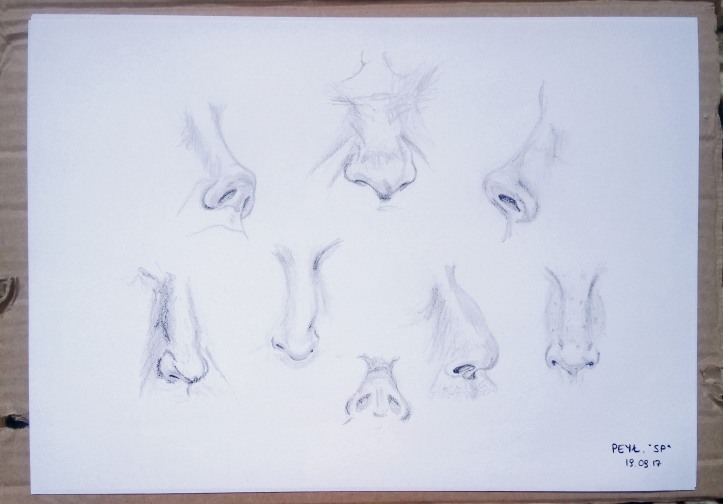 The drawing above is about noses from different angles in different characters; like straight, crooked, hawk, turn up etc.
A note; a nose does’t have to be symmetrical and/or have a symmetrical position on face, if I could tell in a proper way. An example; my nose is symmetrical but turned to one side a little bit, I realized by biometric photos. 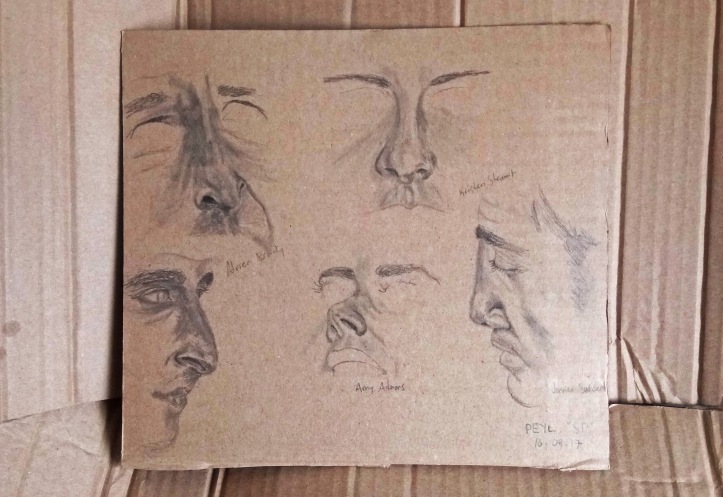 Here I have something more with 2B, 4B, 6B and 8B sketching pencils on a cartoon. I used blending tortillon for tones.

You can (maybe secretly) examine people’s noses around and try to see those circles, ovals; in what angle nose looks how; notice some characteristic features etc. Also you can google some names and try to draw their noses, for example I did Owen Wilson, Adrien Brody, Amy Adams, Javier Bardem, Meryl Streep, Kristen Stewart(I love her thin bridged nose!)… Many names actually.

Now draw maaany of them –but not only from front my friend! 😀
I’d like to hear about your process! Write me.
Happy sketching!