In the 8th month of my ‘SP’ finally, I am starting the human body with a great excitement. That topic had seemed so far away back then.

There are a few points you should surely remember, then you can build other information on them. When I have studied this for the first time, all of those “1/2 and 2/3, here is the same as here and here is wider and here is a curve” things looked too much and I couldn’t learn all at once. Though that proportions change in everybody a bit more or less. Well;

-Head/whole body height fraction generally is between 1/8 (whole body height includes 8 heads in total) and 1/6,5-1/6.
-An imaginary horizontal line divides the body into two, that passes from pubic bone; there is the middle point.
For me, these are the two main facts. Of course, some people have longer torsos or longer legs in proportions.

Here I have my old studies from 2014 October:

I worked with 1/9 fraction, the study was supposed to be fashion figures. In the fashion industry there are technical drawings where you work with exact/true proportions; but for artistic illustrations, proportions change to 1/9, 1/10, 1/11, 1/12… And we see looong legs, sounds cruel a little bit, doesn’t it? 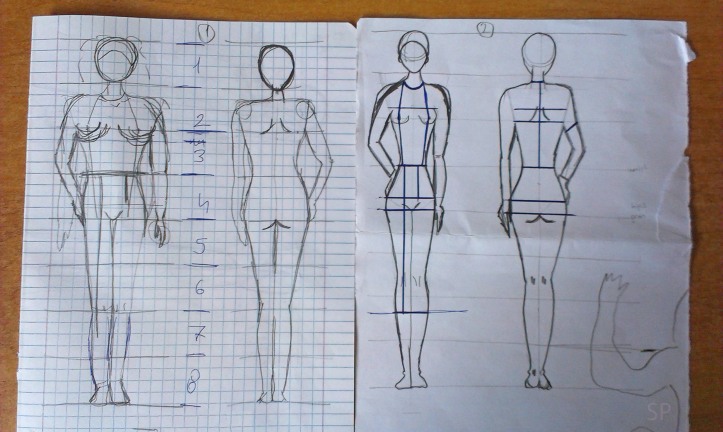 When I was little, really little, my brother and cousins tried to convince me that I was adopted and coming from apes because I had longer arms than they have; I was confused, I don’t say that I believed but I was confused because my arms really looked longer at the moment. Who remembers Dhalsim from Street Fighter? Maybe it was Dhalsim who was my relative, cool smiley.

Ok, let’s be back to the topic.

In here I draw 8 sections, 9 parallel lines in total; I measure the distance with my eyes, I don’t do millimetric checks.

It appears in sources in different variation; for example it can be a woman body from a fashion illustration, feet with high heels; so above I did both male and female’s front sides like hung in the air-or with high heels (well, men wore high heels in 70’s) and back sides normal standing. That changes proportions a little bit on the knees, that mid-line between pubic bone and ground/feet shifts a little bit. See the difference between the back and front sides above. You can decide while drawing, like you can actually say ‘something looks wrong in here‘ and play with proportions until what you want to see.

I think while learning proportions, it is really not important the quality of your lines, and you can even draw curves with straight lines at first. Later you start drawing them naturally. But this is a fact that you should draw body proportions at least a couple of times, then your hand gets it easier.

There is that vertical line, medial line, which divides the body into two. But we are not perfectly symmetrical.

Now let’s talk about male and female bodies apart. Here comes the female one.
Shoulders are broader than hips generally, there are different body types though, I believe this is going to be the next tutorial’s topic. In comparison to a male body, female’s shoulders are more narrow and hips are bigger. The female body has more curves in waists. 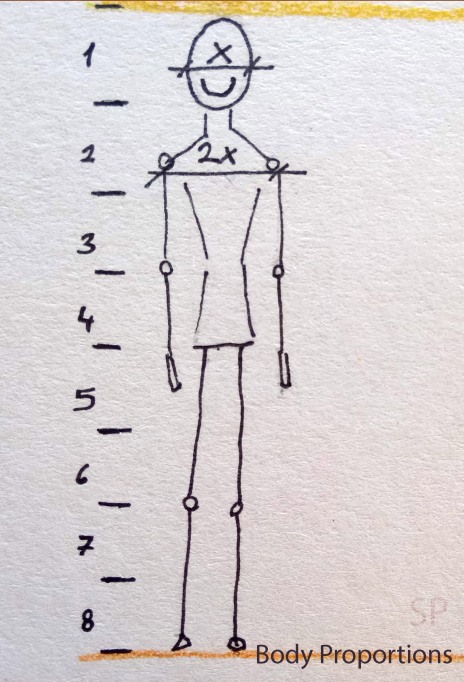 Here is my ‘XD’ human, is drawn in the simplest way. It was on the left down corner in the previous image, I enlarged it here. As we see here, that shoulder’s size is twice of head’s size.

And now here it comes a male body: 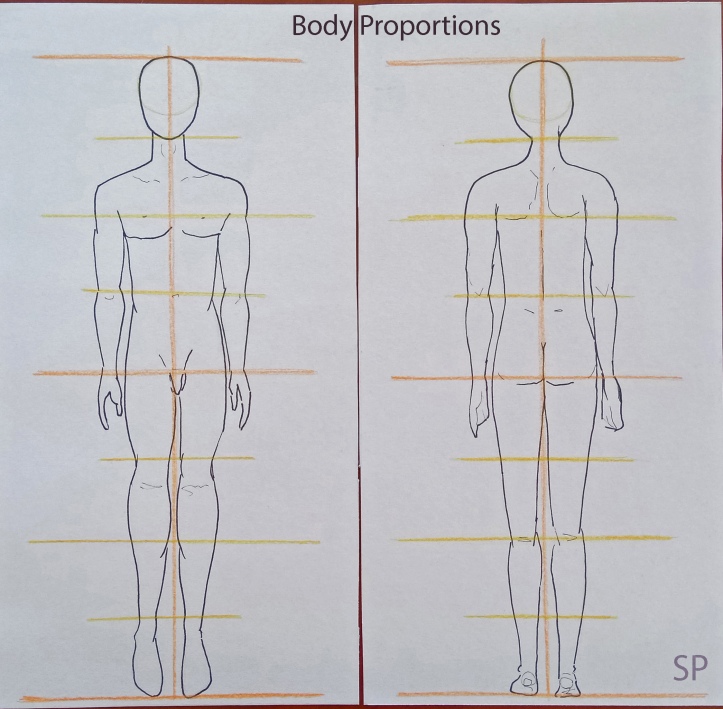 I didn’t bother writing and pointing the same things in here and drowning the drawing with details. simpler is easier. I didn’t draw 6 packs, I haven’t seen them in real from close -_-

The male body has broader shoulders (Y) and smaller butts (I love drawing butts for both gender 😀). A male torso has a ‘V’ shape, I mean triangle (but sometimes it appears as a rectangle, hehe). Shoulders are broader than the butt and also than female shoulders, stronger muscle structure, stronger legs, sounds like I fantasize at the moment more than info telling 😀

Repeat drawing them at least a few times then you will remember proportions and also curves will have a more natural look; that needs practice, take your time. I should also add that after some time you won’t need those guidelines, you won’t be dividing bodies into 2-4-6-8 pieces, whatever. Your eyes will be enough to perceive.

I surely had fun while preparing this post. Enjoy!