Previous week I mentioned that drawing a sea composition could give a more realistic result with watercolor; I repeat the same and add acrylic painting, too.

About drawing waves, ripples and all that foam I can’t decide whether it’s so simple or just hard. I think playing with a color’s tones in the wave surface makes it look admirable.

16 months back from now, march 2016, I drew a dream I saw. It was a huge one wave was ahead of me and was about to swallow the skyscrapers and me.

When I drew this someone told me it looks like some buildings over the hill.

Here is what I chose this week which is a single big wave (as it appears on the photo, because of the capturing angle). 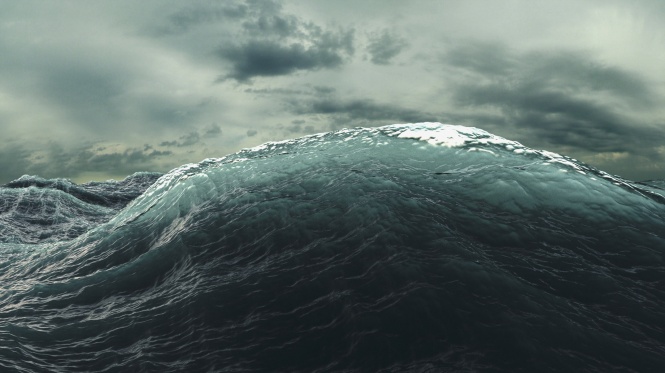 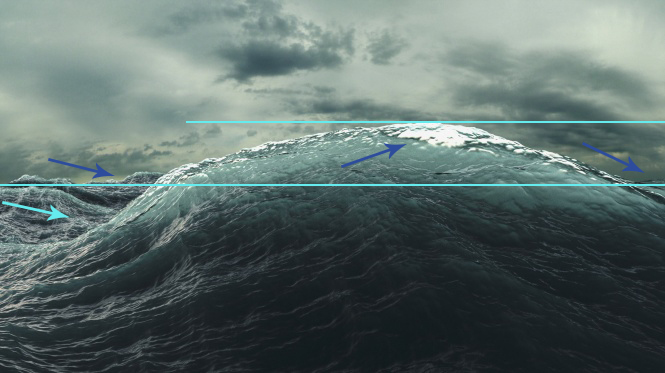 The peak of the wave is above than the middle line of the paper and it is even higher on the right, like the arrows shows.

At first step I drew the contours of those waves and I used 2B and H sketching pencils slightly to cover the drawing area all. In this study I planned to have light parts with a kneaded eraser and manage a smooth passing between tones with blending tortillon. If you don’t have a kneaded eraser try to keep some linear areas white, in other words preserve that areas blank but don’t draw outlines with heavy lines, maybe too light lines which will be easy to get rid of.

It looks like there are other smaller waves within the big one or smaller one in front of the big wave. So downwards of our paper we draw more peak of waves. Try to imagine those waves, the high point of a wave is shorter in width than lower linear part of the wave. So how to do those waves; with strokes of kneaded eraser you can get lighter tones where you need. So in that step I made a tiny edge on the kneaded eraser and deleted thin curvy lines. Rolling the kneaded eraser between my two fingers made deleting easier and somehow gave more natural result.

At first step 4B pencil has joined, we are going to darker.

I hold pencils away from the tip to be able to use it better and it is more comfortable. Also I use them slightly on paper surface in an inclinatinal angle, but with the tip/top of the pencil.

When it comes to blending tortillon I do it from light parts to dark.

More details and darkening partly. The wave is dark at the bottom, gets lighter as we go up.

Our bloody wave is ready, now I am going to add a sky as bloody as the wave 😛

The wave composition heads to right side a little bit, so it is like it is heavier on the right side. So I am going to balance it on the left up-right down direction with clouds. 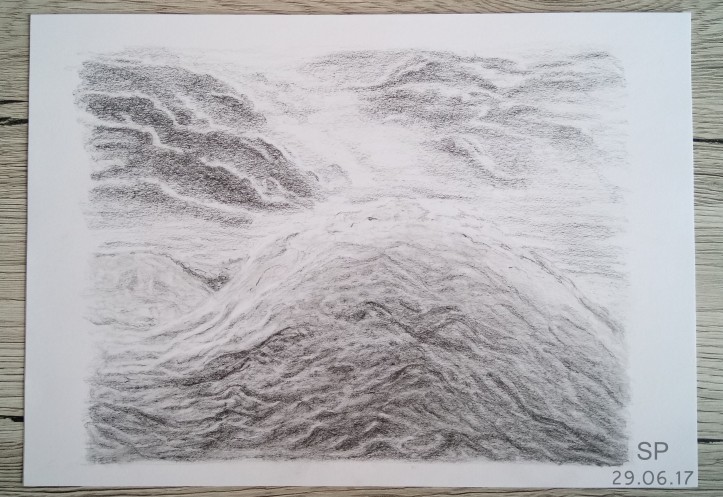 If you are interested in I am dropping my cloud drawing tutorial’s link in the end of the post, you can visit.

Next week I am planning to share waves in acrylic. So, see you in the next post.
Keep in touch! ^^

Source of the wave photo:
https://www.goodfon.com/wallpaper/voda-volny-more-okean-wave.html