Hi there everyone! We go on with another title of nature which is the mountain.

I am having a fast start with a simple drawing of a mountain:

The first step is the outline and other main lines for the main shape of the mountain. Note that those lines are not so much straight and regular. Remember that a mountain is an organic form and you don’t have to stick to the drawing below.
At the second step add some lines to a better perception of the form, those depth changes on the surface of the mountain with earth, rocks and plants.
At the third step fill the empty places of the mountain on paper with the same drawing style you use; which is like I used lines above, in the next example I used both dots and lines you are going to see.
At the fourth step to strengthen the main form I added extra lines over the outline and main lines (the ones you see at the first step)

A little more complicated one: Call of dottin’

There is a high peak and other chains of mountains. Draw the main lines of the composition like in the first example above. I added some (almost)vertical lines on the left back side. Some extra lines all over to show that there are some ups and downs and other shapes.

In the brown frame, you can see its enlarged version.
I left a blank area to add some clouds at the end. You can see that above.

Going on dotting and scribbling and adding extra lines. Dots are dense at some points. You can imagine it like there is a big rock and that causes shadow somewhere around it or there are parts then suddenly small flat surface; surfaces and surfaces…

Another part of details to show the way to do it. Done version with another daylight, yeah, colours change that much. I am planning to add some clouds and snow later. That area is still blank in my sketchbook. Some dark brown colouring pencil, white charcoal and derwent change like that.

I have something more… 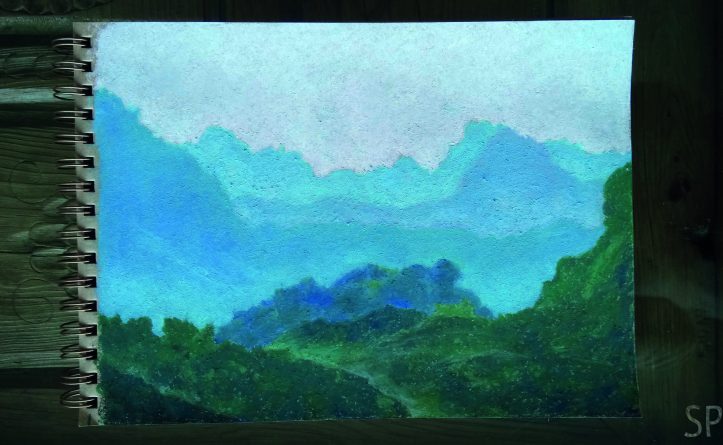 …which is a landscape of mountains behind mountains with oil pastels. This one is an example of aerial perspective, where you create the perception of distance with many layers of mountain chains, in fading tones of colours.